During this season we are going on a journey back in time, thirty years back in time to be precise, to a season that ended in a historic Championship and Rovers’ first ever trip to Wembley!

The Division’s biggest spenders, Notts County, were the next league obstacle standing in the way of Rovers aim to be a dominant force in the league and they arrived at Twerton Park on 2nd September.

County had spent £175,000 on Phil Stant from Hereford, £100,000 on Scarborough’s Craig Short and another £50,000 on former Rovers player Nicky Platnauer from Cardiff City.

Prior to the game goalkeeper Nigel Martyn was called into the England U-21 squad for their next game, in Sweden.  At 23 he was one of the over age players and was hoping to win his 12th cap.

Spurs were the latest club to be linked with striker Gary Penrice even though he had already spoken to Wimbledon, managed by former Rovers boss Bobby Gould.

The game against Notts County produced five goals with Rovers coming out on top 3-2 thanks to goals by Gary Penrice, in the first minute, Devon White, a former Notts County triallist, and skipper Vaughan Jones.

Manager Gerry Francis was unhappy with what he perceived as County’s intimidating tactics and said; ‘I have never seen a side kick so many people and in the second half in particular they came out to intimidate us and I was disgusted.’

Nevertheless, his side boasted a 100% record after just three games.

Nigel Martyn played for the national U-21 side ahead of Rovers next fixture but couldn’t prevent them losing 1-0 against Sweden in Uppsala.  Swindon Town decided they would like to sign Gary Penrice, while Bobby Gould had still not given up on the idea of taking him to Wimbledon.

Bolton Wanderers were next on the agenda.  They were still playing their football at Burnden Park and the Reebok, or whatever it’s called now, was still a dream.  The 100% record disappeared though as Bolton were 1-0 winners thanks to a 67th minute David Reeves goal.

The following week saw Gary Penrice turn down a move to Wimbledon while Rovers signed a player they viewed as his replacement when he did move on.  Tony Sealy was the player, arriving at Twerton Park on a non contract basis initially but signing a two year deal not long afterwards.

With it likely that Penrice would soon be leaving, it was announced that another Rovers player, goalkeeper Martyn, might be on the move as well, his likely destination being Selhurst Park, home of Crystal Palace.

A 3-0 win against Preston North End, at Twerton Park, saw Rovers maintain their excellent start to the season with Geoff Twentyman, against his former side, Penrice and Devon White on the scoresheet.

Tony Sealy made his Rovers debut in this game, when he went on as 55th minute substitute for Andy Reece and he declared himself excited by his new team; ‘Unless this was a freak performance, which I am assured is not the case, I have joined a team that plays excellent football,’ he said before adding, ‘I am looking forward to being a part of it.’

The result left Rovers at the top of the table on 12 points, one ahead of second placed Bury.

One week later came the long awaited first local derby of the season as Rovers made the short trip across Bristol to face City at Ashton Gate. Even former City boss Alan Dicks was predicting a slender win for Rovers!

City were predicting a capacity crowd of 25,000 and new signing Tony Sealy who had experienced playing in front of a 116,000 crowd for Sporting Lisbon against Benfica, admitted that there was a special atmosphere building up in the Rovers camp.

Both teams had spied on the other in the build up, Rovers coach Des Bulpin having watched City in action against Cardiff City at Ninian Park while City representatives Jock Rae and Mike Gibson had been at Twerton Park to witness the emphatic victory against Preston North End.

Supporters of both sides were urged to arrive early for the long awaited match, which was likely to cost City around £7,000 to police. 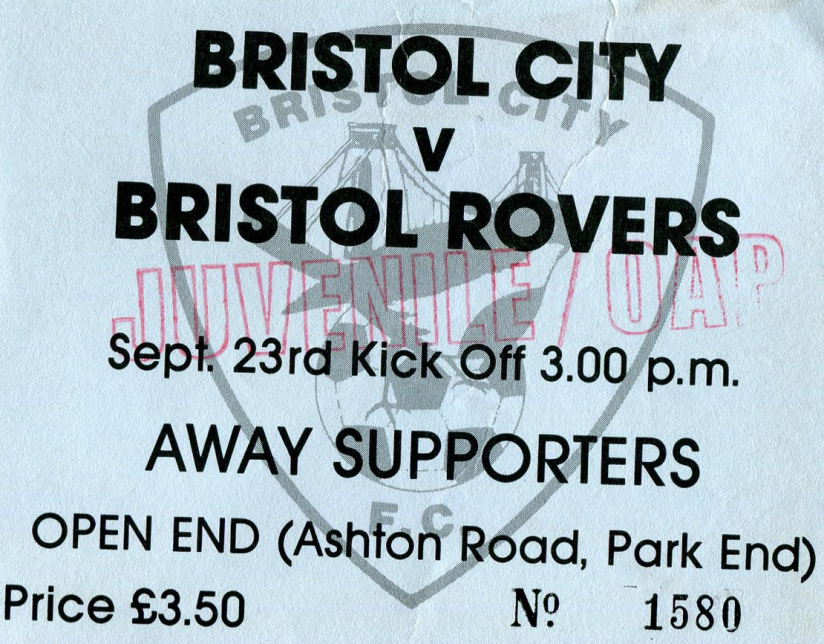 Rovers boss Gerry Francis said he was confident; ‘It’s all about having belief in yourselves. When I came we didn’t believe we could win, but now we do. That’s the attitude we will have against Bristol City and any other side we meet this season.’

His Bristol City counterpart, Joe Jordan, said; ‘We are not a kick and rush team and there is a danger of trying to hurry things because of the tension and pressure from the terraces.  That is where our players must show a degree of professionalism.  The aim is to attract packed crowds to Ashton Gate every week so we must learn to handle big occasions.’

There was one interesting duel to look forward to, between rival strikers Robbie Turner and Devon White.

On 29th August 1987 Turner was scheduled to lead the line for Rovers in a home match against Aldershot.  However he was held up in Bank Holiday traffic while travelling to Bath from his Cardiff home and White deputised for him.  Turner made just one more appearance for Rovers, White scored against Aldershot and went on to become a Rovers cult hero.  Turner returned to Bristol, and Ashton Gate, via Wimbledon.

The game against City ended goalless, which pleased Rovers more than City as they played for all but 34 minutes of the game with ten men following the dismissal of Ian Alexander, who was sent off after collecting two yellow cards.

In the end, it was a disappointing spectacle for the crowd of 17,432. Not sure what happened to the prediction of a capacity 25,000!

Gerry Francis claimed that his half time showdown with referee John Deakin prevented major crowd trouble; ‘The way his decisions were going there would have been a riot if I hadn’t spoken to him.

‘Trouble was threatening to boil over among our supporters because the referee was just not giving us a fair deal. I told him I would go in and try to calm down my players and the situation generally, but that he would have to start giving fair decisions for both sides.

‘Things were handled better in the second half.’

On the Monday after the match Rovers promised supporters that goalkeeper Nigel Martyn would not be sold for less than £1m.

Tuesday saw Rovers travel to Brisbane Road where they secured another 1-0 win thanks to another David Mehew goal. However, victory came at a cost as they also picked up another red card following the 65th minute dismissal of Steve Yates.

It was another decision which left Francis disappointed; ‘I was disappointed with the referee. Yates won the ball but collided with the other player. He hadn’t been booked before in the game.’

It meant that Rovers had collected at least one caution in seven of their nine games earning themselves, unfairly in the opinion of Francis, a reputation as a team attempting to kick their way out of the Third Division.

The last day of the month saw league leaders Rovers face a home game against Reading who were already trailing the Gas by six points.

In the meantime, Queens Park Rangers were the latest club to declare an interest in signing Gary Penrice.

The game against Reading ended goalless thanks, in no small part, to goalkeeper Nigel Martyn who made an outstanding late save from Linden Jones to preserve a point for his side.

Just for a change there was praise for the match officials from an unlikely source; ‘I thought the referee and linesmen were excellent and told them so afterwards,’ said Gerry Francis.

Rovers ended the month in second place, one point behind the Division’s other Rovers, Tranmere.

Full marks to anyone who can correctly place all 32 in the photo, including the man hiding behind Phil Kite, and the miscreant behind Christian McClean [the ‘Anfield cut’ gives that one away…].

Jones today, introducing the BRFPA to our inaugural Former Players Dinner in April 2017

Gerry Francis back in the house!

Jamie Cureton back where he treated gasheads to many of his 78 goals.